The penetration of smartphones in Korea is significantly higher than the average in the world and it reach 83 percent as of end-March, according to the data compiled by Digieco (Yonhap News 2015). For me, Korea is like a heaven of smartphone because ‘you can do almost everything with your smartphone’ in Korea. But convenience is not only technology’s best friend, I mean there are always problems to use convenient technology, such as smartphones. Yes, smartphone is a double-edged sword, like the Internet! If you can do almost everything with your smartphones in Korea, this means that you can’t do anything without smartphones. (I won’t talk too much about smartphones because this blog is more about smart ajummas)

Anyway, smartphone is a pervasive mobile communicative devicenow. People use smartphones in their everyday practices regardless age and gender. Ajummas are no exception. There are exact data about penetration rate of smartphone users of middle-aged women in Korea yet, it can be assumed there are increase of using Internet among middle-aged women. 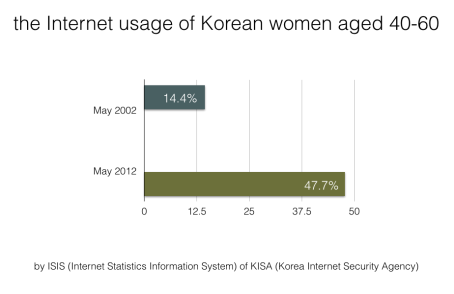 For next post, I will explain in detail why ajummas should be considered as ‘smart ajummas’ today in Korea.